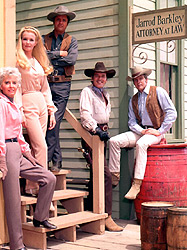 Wealthy matriarch Victoria Barkley (Barbara Stanwyck) heads the rich and fabled Barkley Ranch in Californias San Joaquin Valley, near the town of Stockton, during the 1870s. Her three sons and beautiful daughter team up with her as they encounter convicts, villains and the less fortunate in Californias Old West. Jarrod (Richard Long) is the oldest son and a prominent Stockton lawyer, Nick (Peter Breck) is the hot-headed ranch foreman, and their illegitimate younger brother Heath (Lee Majors) is Nick's frequent sidekick. Together the brothers fiercely protect their charming and impulsive sister Audra (Linda Evans). A fourth brother, Eugene Barkley, left the series halfway through the first season (due to actor Charles Briles being drafted by the Army) and was later mentioned as having gone to study medicine at Berkeley. The family also had an African-American butler, Silas (Napoleon Whiting), who was a frequent supporting actor on the show.

The Big Valley ran for four seasons, from 1965 - 1969 and was loosely based on the real life Hill Ranch which was located near Stockton and run by the family matriarch, her three sons and one daughter, after her husband was murdered in 1861.