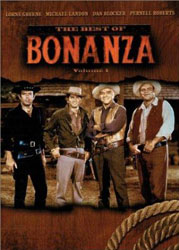 Bonanza was one of the longest running Western TV series in American television history. One of the first TV series ever broadcast in color, Bonanza's 14 year run is second only to that of Gunsmoke. The show depicted the life and adventures of the Cartwright family during the 1860s. The thrice widowed patriarch Ben Cartwright (Lorne Greene) made his fortune in cattle, mining and timber, but he was mostly occupied with his three adult sons: the intellectual, university educated Adam (Pernell Roberts), the big, gentle giant Hoss (Dan Blocker), and the hot tempered youngest son, Little Joe (Michael Landon). The family lived on a huge ranch called the Ponderosa, located on the shore of Lake Tahoe in Nevada, not far from the silver boom-town of Virginia City. Supporting actors included Sheriff Roy Coffee (Ray Teal), and the immigrant Chinese cook, Hop sing (Victor Sen Yung). The Bonanza TV series became a huge success and from 1964-1967 it was the top rated show on television.