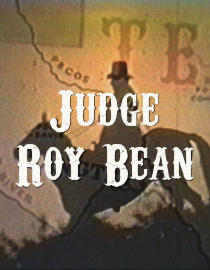 A TV series is based on the story of real-life Judge Roy Bean: "The Law West of the Pecos". Bean held court in a saloon that also served as general store in the tiny town of Langtry, located in the lawless southwest Texas region of the United States.

Judge Roy Bean debuted in 1955 and only ran for one season, but it was one of the first TV shows ever filmed in color. Lead actor Edgar Buchanan was a dentist who moved to California to pursue a career in acting. He starred as Uncle Joe in the long running Petticoat Junction TV Series and also had many noteworthy film roles. Letty Bean, who stars as the Judge's niece, was played by Jackie Loughery - Miss USA 1952.