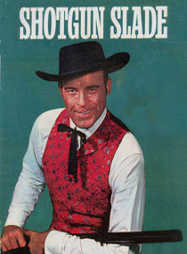 Slade is a private detective based in Denver, Colorado. His weapon of choice: a combination rifle/shotgun, this gives him superior ability to fire on targets at either close or long range. Slade sells his services to anybody desiring to bring criminals to justice, recover stolen money or simply seek out justice in the Old West.

Shotgun Slade was a detective style western TV series that was considered especially violent for the period. The show ran for two seasons, from 1959 - 1961, and was noteworthy for its jazzy musical score. Show creator/writer Frank Gruber, who also created the classic western TV series Tales of Wells Fargo, was a prolific writer of pulp fiction and western novels as well as the creative force behind Shotgun Slade's sharp and often saucy dialogue.