Stories of the Century

Watch Stories of the Century! 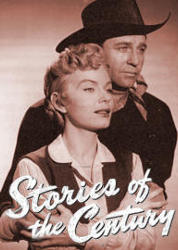 Railroad detective Matt Clark (Jim Davis) and his attractive assistants Frankie Adams (Mary Castle) and later Margaret Jones (Kristine Miller) track down the most notorious outlaws of the Old West. Over the course of 39 episodes they succeed in capturing the likes of Billy the Kid, Jesse James, Geronimo, and Doc Holliday. While the timing of the years was not quite accurate (the outlaws that they pursued during one year of the series covered a historical period of 40 years), each episode followed the basic historical facts, which were taken from newspapers and other written records.