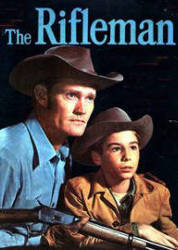 The Rifleman presents the story of Lucas McCain (Chuck Connors); widower and Civil War veteran who tries his hand at ranching. While raising his son Mark on a ranch in a New Mexico town of the 1880s he fights off bad guys and teaches Mark wholesome values along the way. The show took its name from McCainÂs specially modified rapid fire Winchester rifle that allowed him to fire a round in three-tenths of a second. The show's attractions included a star-studded selection of special guest stars as well as the stars themselves. Chuck Connors was a former major league baseball player and Johnny Crawford was a former Mouseketeer. In the late 1950s when the show premiered, it was considered the most violent show on television.