Watch The Young Riders! (USA only) 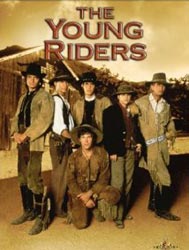 Six young men join the Pony Express overland mail service in 1860. The riders are based at a station in Sweetwater, Wyoming Territory and their job is to ride like wildfire for 75 miles each day until they arrive at the next way station, where they hand off the mail to the next rider. The TV show riders include historical figures such as Buffalo Bill Cody (Stephen Baldwin), Wild Bill Hickcock (Josh Brolin) and The Kid (modelled after Billy the Kid) as well as a mixed race Kiowa indian, a girl posing as a man and in Season 2, a freeborn Black man. Although historically inaccurate (only Bill Cody actually rode for the Pony Express), the show had a strong revisionist slant and dealt with issues such as racial intolerance and feminism. The Young Riders also included frequent guest stars from the heydey of TV westerns, such as Pernell Roberts (Bonanza), Buck Taylor (Gunsmoke) and David Carradine (Kung Fu). The TV show ran for three seasons from 1989 - 1992 and was one of the very few western TV series to debut after 1980.